The purpose of the Theater is to produce and perform plays and musical productions
​to promote the theater arts through public education and entertainment.

The Smithfield Little Theatre was organized from a group of people who had worked children's theater with the Smithfield Recreation Association. The group produced the first show " The Cat and the Canary " at the Smithfield High School in August of 1962.

From 1962 to 1966 the Theatre group produced shows at the Smithfield High School, or the Smithfield Community Hall "the present location of the Fire Department". 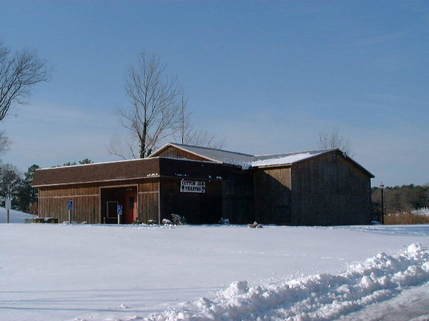 The old warehouse on Commerce Street, where there used to be a cotton gin, hence the name "The Cotton Gin Theatre", was leased for $1.00 a year from Howard W. Gwaltney of ITT Gwaltney. In 1973 the Cotton Gin was donated to the Smithfield Little Theatre by ITT Gwaltney Inc. thanks to the efforts of the late Howard Gwaltney Sr.

The Cotton Gin was the only building on Commerce Street not destroyed in the great fire of 1921 that burned out all of the businesses on the Pagan River, Smithfield's deep water harbour.

This is the way the Cotton Gin looked after 4 construction projects which included:

4. Adding seating area.
In the latter years of the 1990's negotiations took place between Smithfield Foods and the Smithfield Little Theater to make a trade, the old Cotton Gin Theater for a new theater to be located in the Smithfield Center Complex. Many months passed as the plans were changed, and changed again. Finally the construction was completed and the move was made to the new theater in the Summer of 2001. Training was held on the heating and air conditioning systems, the audio system and the "state of the art" lighting system. The new theater conforms to the requirements of the "Americans with Disabilities Act".

Construction begins in the Fall of 2000 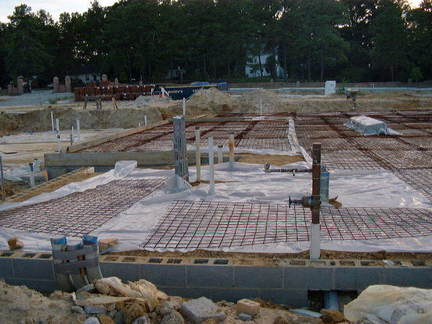 This picture was taken from the right rear of the building showing the stage and seating area. To the lower left is the lobby and rest room area. 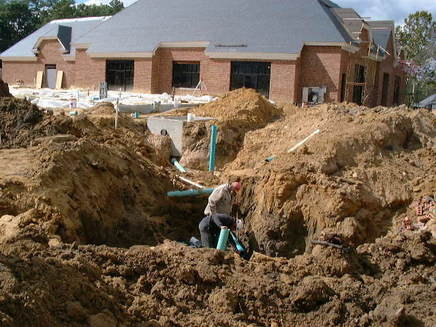 Six feet of clay had to be removed to make the theater level with The Smithfield Center, seen in the background. This picture shows the plumbers installing the water supply to the new theater. 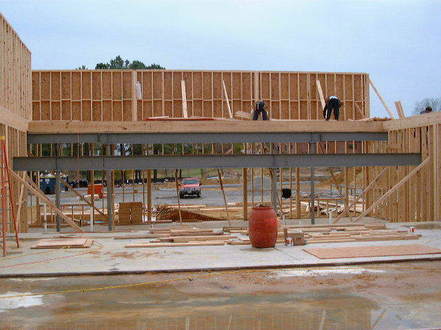 This is a view from the stage looking South at the lobby. You can see the "I" beams set to support the seating. Also the second floor framing is being put in place. The center of the second floor area is where the controll room will be. 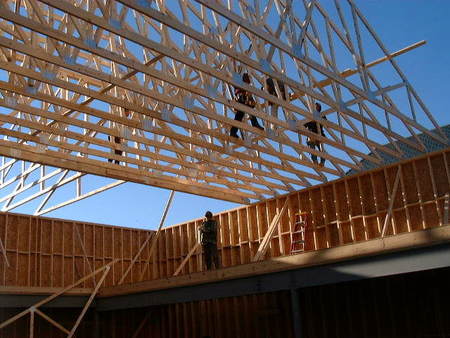 The first of the trusses are being installed to support the roof. 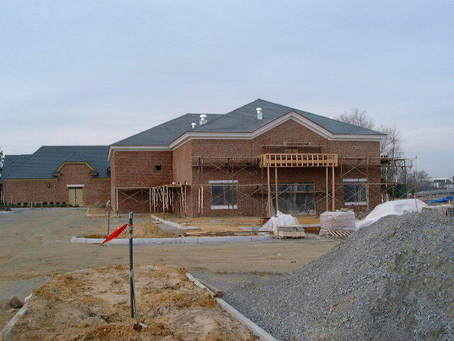 This picture was taken in the last stages of the construction. The paving and some internal work was still to be done. 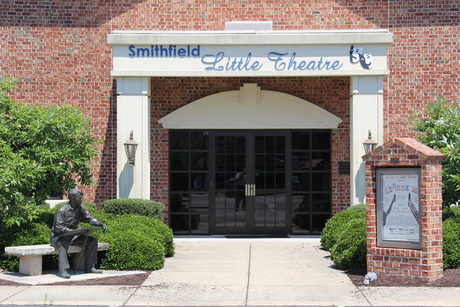 Mr. Luter called and offered the use of the Robert Frost statue at the theater, citing that it would have more viewing at the theater than at Smithfield Foods Corporate Headquarters.